This weekend I completed half marathon #10 in the fabulous Las Vegas. Why not do a crazy one for #10, right? I signed up for this race while in San Diego for the Rock n Roll Half Marathon there. It was expensive but when I heard they were shutting down The Strip at NIGHT for the first time for this ... I had to. High Five!

It was everything I expected it to be. Crowded, energetic and a little nuts. I loved it. We drove up from Phoenix on Saturday morning and went through rain and then SNOW which was crazy enough for a couple Arizonians. We checked into our hotel, had a bite and a couple beers and then headed to the Expo. Getting there was a bit of a challenge since there is no straight shot in Vegas -- they want you loop through each casino and be tempted to drop another quarter or dollar or more into the machines. We got trapped by the Stiletto Dash event and crowd and had to do some crowd surfing but then once we reached the expo, it wasn't as bad as I expected. We took the time to enjoy ourselves and take a few pics ...

Then we met up with some other friends who were in from San Diego and Detroit for the race as well. Stayed out late but nothing TOO crazy (in my book) - just catching up with friends.

Sunday was weird. The cool thing about a night race is that you can sleep in and you have all day to get yourself ready, hydrated, rested and fueled. But really, what do you do? What do you eat? We just sort of made it up and kept the day as relaxing as possible. And before we knew it - it was race time!

And I had to get my Elvis on ... I didn't go whole hog Elvis, I just went Elvis-inspired with a bedazzled "A" on my cape. But I was pretty awesome. We walked through the casino to quite a few looks of awe. I'm sure it was awe, wasn't it?? 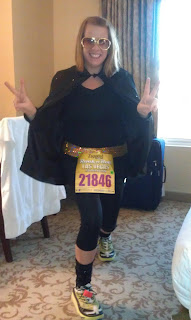 We made our way about a mile down to the start line and caught part of the pre-race Cheap Trick concert - they sounded great! I like the idea of doing it before the race. It was CROWDED. 44,000 racers? I expected it.
Since I've broken so many of my own records this year, I qualified to move myself up in the starter corrals. I originally planned to stay with my friend Laura, but she had just returned from a European vacation and was feeling jet lagged and wanted me to go off on my own at my own pace. My NEW predicted finish of 2 hours put me in either corrals 9 - 14. I'm always so afraid to commit to something I can't do and didn't want to jump into a corral I didn't deserve and so I chose 14. Silly silly me. First, there clearly were lots of people who didn't have those same thoughts. I spent the entire race passing people. People who had no business being that far up or that far over left ... but nevertheless.

I loved the energy of this race. I loved talking to other runners about their experiences and their expectations and why they love running. I love watching people help each other out. Yes, there are the rude people who push their way past you or won't walk back the 10 feet to the corral opening and climb over and kick you in the head (2 men in a row did that - the second AFTER he saw the first guy kick me) but the good moments outweigh the bad.

I loved running on the strip at night. So many people cheering. The lights. The energy. The drunk spectators were HILARIOUS. I liked the one guy who kept yelling at everyone that they were going the wrong way and then bending over with mirth at how funny he was. The bands were great (especially the Social Distortion cover band!). I had a great time. It was difficult constantly negotiating the crowd and frustrating when I got boxed in by people running together. But I wasn't bored. EVER. I felt like I was sprinting a lot and really started to wonder if I could get a new PR, even though I hadn't really set a goal for this race - Vegas was all about fun for me. But I really thought I was doing well - I didn't check my Garmin though until almost the end. I felt that if I didn't watch the street and the other runners at all times, I could really hurt myself. At miles 11-12 I was spent and took a couple walk breaks to check my Garmin - I wasn't going to break 2 hours so I just continued along. Even to the last .1 where I usually sprint it in, I was still trapped by the crowd. Crazy. But I came in to the band singing a little Beastie Boys - and that was cool and a good way to wrap it up. 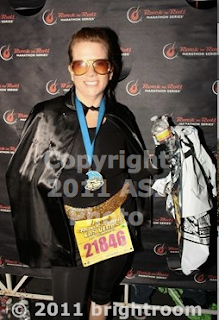 Once I finished - it took a while to get out and I was FREEZING. But I really thought for 44,000 people it was pretty well run. My expectations were low. Don't get me wrong - 44,000 people is TOO many for that space - they could go smaller and make it a little tighter. And I was SUPER lucky. People behind me really ran into issues and there were some horror stories to be told. The Competitor Group has some work to do ... but my experience was good. I probably wouldn't do this race again - but it's the same reason I didn't want to do the Phoenix Rock N Roll again. It's too crowded for me and cost too much $$ to have to fight that many people. The Rock N Roll series are good for first timers but I'm ready for smaller more local races.

My official race time: 2:06:33. But my Garmin tells me I ran 15.1 miles (dodging 44,000 people) at an 8:20/pace. I WAS booking it - no wonder I was tired! So if I didn't have the extra miles, it probably would have been a new PR. Next time! Even at that time I still finished in the top 22% overall and in the top 14% of females and my age Division. Pretty amazing for a girl who just signed up for these things to finish. Yay!

You rock, Aimswa! Congratulations on another great race and completing #10! It was a great trip!

Such a great finish Amy!

I've always wanted to do this race! Sorry it didn't go as you had planned. I have heard some horror stories as well. You'd think running on the strip at night would be amazing...what could go wrong? So much apparently. Congrats on your race!