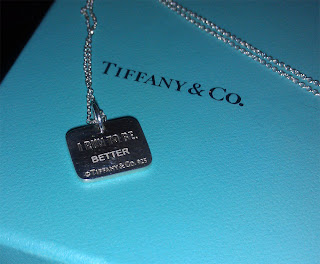 Last weekend I completed marathon #3 in San Francisco and it was probably one of the proudest moments of my life. On Sunday October 16, 2011 at 41 and a half years old, I realized that I could be anything I want to be and that I am truly capable of greatness.

It's an interesting concept and something most won't understand. I should already feel accomplished. I've been fairly successful in my educational and work worlds. I achieve my goals and I receive accolades. I work hard and am well respected by most ... (those who don't see that are just jealous - ha!).

I am proud of who I am. I'm proud of the work I produce. I'm proud that my charitable side has touched some people and inspired others. Even though I invest a lot of work into it and experience a good deal of frustration, I also am aware that it comes to me pretty easily. I am lucky that I'm creative and logical. It's a gift that I'm able to communicate my ideas and influence people to see what I see. I make good human connections and that allows me to pursue my charitable ventures. But I feel that it's simply who I am - and I'm just following the direction I'm meant to go. I've been given these gifts and I'm merely putting them to use.

But this running thing ... this is a whole new side to me. It's athletic. I was an asthmatic baby/toddler whose eyes were always glued together with some crazy infection. I was the child who got pneumonia at least 2 x a year, had chronic bronchitis & pleurisy of the lungs and probably missed 50% of my elementary school years from illness. I was the teenager with scoliosis who spent her high school years in a full back brace. I was the woman in her 20s struggling with addictions. I was never an athlete.

This running thing came to me through that charitable arm of mine. I received a flyer about a marathon program to benefit the American Stroke Association and decided to check out an informational session. I heard statistics about people who suffer from strokes and learned the importance of knowing the signs. I heard about how the coaches could take you from couch to marathon in this time period. They gave fundraising tips and said people would help us with that. And then ... they brought up a family and their toddler son who nearly died from a pediatric stroke and told me I would be doing this for him. Check written. I registered. I was about to train for and run my first marathon.

The first 3 mile training run was my very first run. It was hard. My throat burned. My head hurt from not knowing how to relax my jaw and simply breathe. Over the course of the training I suffered many pains. I learned proper shoes were important. I learned bad clothing choices could leave you missing patches of skin. I learned running through the desert as the sun rises can be awe-inspiring and running through the desert as the sun beats down on you can be brutal and lonely. I learned you REALLY can't escape yourself out there pounding the pavement mile after mile and I shed many a tear while working through personal issues while my brain had nothing else to do but focus on them. It was amazing. I met a friend who was also dealing with some issues and we shared ourselves raw -- and developed bonds like I had never experienced before.

I ran my first marathon on May 5, 2002 in Vancouver BC with my new friend Rhonda. We completed it in 5 hours and 52 minutes. It felt great - and I was hooked. I was happy with my accomplishment and never anticipated being in the front of the pack. It was rewarding just to have run and completed a marathon.

I went back to the Stroke Association to participate and help mentor the next group of runners. Through that experience I met my now long-time running partner Laura who worked for the Stroke Association. We have been running and sharing and laughing and venting and crying together ever since. I've run consistently at times -- and let work and other priorities take over other times. Each time I come back to running and each time it's like starting at square one. But even when it was difficult, it's been rewarding in some way as well.

In 2006 I decided to run another marathon and I don't go small when I do things. The first time was complete couch to marathon in 3 months. This time I wanted to travel to Greece and run the ORIGINAL marathon! Rather than just train on my own, I decided to pour my energy into helping others run their first marathon and signed up as a mentor with Team in Training to benefit the Leukemia & Lymphoma Society. As a mentor, I'm assigned a group of people and I make sure they attend training runs, help guide them through fundraising and wake up at 3 am Saturdays all summers to help the coaches set out water stations along the canal. It's no small task but find I do best when I'm focusing on helping others and not relying on my own willpower to push me through. It's motivating and rewarding.

I ran my 2nd marathon in Greece (from Marathon to Athens) in November 2006 and completed it in 5 hours and 25 minutes. I was pretty pleased with my time considering the course was 13 miles uphill. I was still toward the back of the pack but I knew it was an accomplishment just to have completed it (according to Wikipedia, the Athens marathon "is perhaps one of the most difficult major marathon races: the course is uphill from the 10km mark to the 31km mark - the toughest uphill climb of any marathon."). Plus I had shaved almost 30 minutes off my first marathon time - I did well.

It was after that race that I stated my next bucket list goal: some day I think I have a sub-5 hour marathon in me. I felt like doing one in less than 5 hours would make me an official athlete. It was the first glimmer I had where maybe just participating wasn't enough, I could actually improve and truly PARTICIPATE.

Unfortunately after Greece is when I really started to experience foot/ankle pains. I could focus another long blog entry about what I've gone through with injuries but this isn't the time.

I threw my name in the hat for the Nike Women's Marathon in 2007 (you have to be chosen through a lottery drawing) and had my name drawn! I signed up again as a mentor with Team in Training and helped guide a whole new group of people towards their first race. About a month or so prior to the race, I was sidelined with injuries and unable to attempt the marathon.

From the end of 2007 to end of 2010 is full of stories of injuries and small comebacks and perseverance and heartache. And when I thought running was completely over for me, I turned to Crossfit to work on my fitness and to see what else I could do for myself through strength ... and learned how strong my body can be. Through hard work and less dependence on technical shoes to control my motions, my body became stronger. And I started to run again. And I started to run more and more. And then I started running with a group of FAST girls who ran consistently, happily and loved to push and encourage each other.

I learned to push myself. I learned to celebrate victories and not let a bad day dictate the next day. And I started to get faster. I ran one evening with a 3-hour marathoner (Jake) who had some advice: he told me you have to be uncomfortable to progress. I've taken that to heart. I think of all the times I've probably held back to make sure I still had something in the tank at the end and probably kept myself too comfortable. And so I push. Some days the "I can't" in my head is stronger than I'd like and she wins; other days she does not.

I've made a lot of progress this year but I don't think I fully comprehended how much. I ran the San Diego Rock N Roll Half Marathon in May and got a PR of 2:15. Then in June I ran the Bryce Canyon Half Marathon and got a NEW PR of 2:07 (but it was mostly downhill, so it feels a little bit of a cheat to call it a PR).

I knew I had a sub-5 in me some day, but I honestly didn't think San Francisco was it. There were more hills than I wanted; I hadn't done a lot of long distances in training; etc. 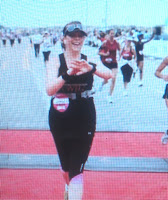 I think it was mile 15 when I started to really hit my stride and looked down at my Garmin and realized I was doing well. At 18 I started to think, "I could DO this." And by 20 I finally figured out: "I'm GOING TO DO THIS!!"

I neared the finish line comfortably and started to realize that I didn't just meet my goal, I had CRUSHED it. I completed my 3rd marathon in San Francisco on October 16, 2011 in 4 hours and 39 minutes.

The Nike campaign that drives this whole race is all about "I Run to Be ..." I run to be sexy. I run to be fearless. I run to be a survivor. I run to be free. After a successful completion of the marathon, you earn a Tiffany necklace unique each race year. On the back of my charm it reads "I Run To Be" and you can take it to the Nike Store to be engraved with your own personal mission.

Mine reads: I run to be better. 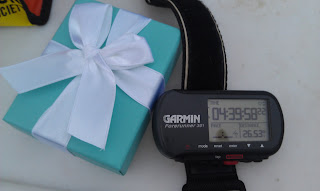 Email ThisBlogThis!Share to TwitterShare to FacebookShare to Pinterest
Labels: Running

You are the BEST! I admire you so much! Congratulations!

You are freaking amazing! Thanks for sharing and making me cry at work ;-)

I am so proud to call you a friend & running buddy!!

I love you Aimswa!! xoxo

I'm so proud of you! And inspired! Keep doing what you do best - being you! Congratulations Aimswa!

Great post. Thanks for stopping by on my blog and pointing me to your blog. You're doing a lot of great stuff and I feel like a stalker Liking your facebook pages and looking at your links. Maybe one day we can meet.

And Christina, for sure! Looking forward to an in-person meeting some time soon!

Amy! You are awesome! Congrats to you!